Why do I see this?

If you do not have a Unix-account, register for one here:

You need to download the NoMachine client and configure it to connect to the Unix-network. Follow the instructions here:

After installation and configuration, create a new virtual desktop. You can now open the firefox browser and access the GPU-website. Inside the virtual desktop, you can also open a terminal window and file browser with access to all your files.


This method works out-of-the-box on macOS and Linux. Windows users, however, must install bash (follow instructions here: How to Install Linux Bash Shell on Windows 10)

Open a new terminal window on your local computer and run the command ssh-keygen to generate a private and public key (if you do not already have it). SSH keys are authentication credentials, just like passwords, and thus must be managed similarly.


The SSH Keys will be stored under ~/.ssh/ and consists of two files:

Next, we need to copy the public key to the Unix-server. Enter the command:

The command then asks for the password for your Unix-account. The -i argument lets us specify the path to our SSH Keys, the ssh-copy-id command will only copy the public key.

Go to your local ssh folder with the command cd ~/.ssh/.

Use your favorite text editor to open/create the config file (for example, vim config).

Then add the text below in your ~/.ssh/config file. Remember to change the username.

Now you should be able to run the command ssh uis which should take you to ssh1.ux.uis.no without password or ssh gorina6 directly to gorina6 without a password.

Verify that the tunnel is up and running with this command: ps aux | grep ssh


You can quit your terminal application, and the tunnel will stay up. That is because we used the -f argument, which put the SSH session into the background.


Tip! To make things a bit easier, the command can be added as an alias. Open your .bashrc or .zshrc file, and add the following: alias sshuistunnel=ssh -D 8123 -f -C -q -N uis


Making aliases should be quite similar on each OS, but if you have any problems adding the command as an alias, see the links below for detailed instruction on your OS:

Make an Alias in Bash or Zsh Shell in macOS, OS X Terminal
How to Create and Use Alias Command in Linux
Create an alias in Ubuntu Bash on Windows


Once that is running, you can use Firefox browser to set the proxy.

Set the manual proxy configuration and set the SOCKS v5 Host as shown in the image below. Do not forget to enable Proxy DNS when using SOCKS v5, or you can set up a system-wide proxy depending on your OS. Then you should be able to access gpu.ux.uis.no from outside of UiS. 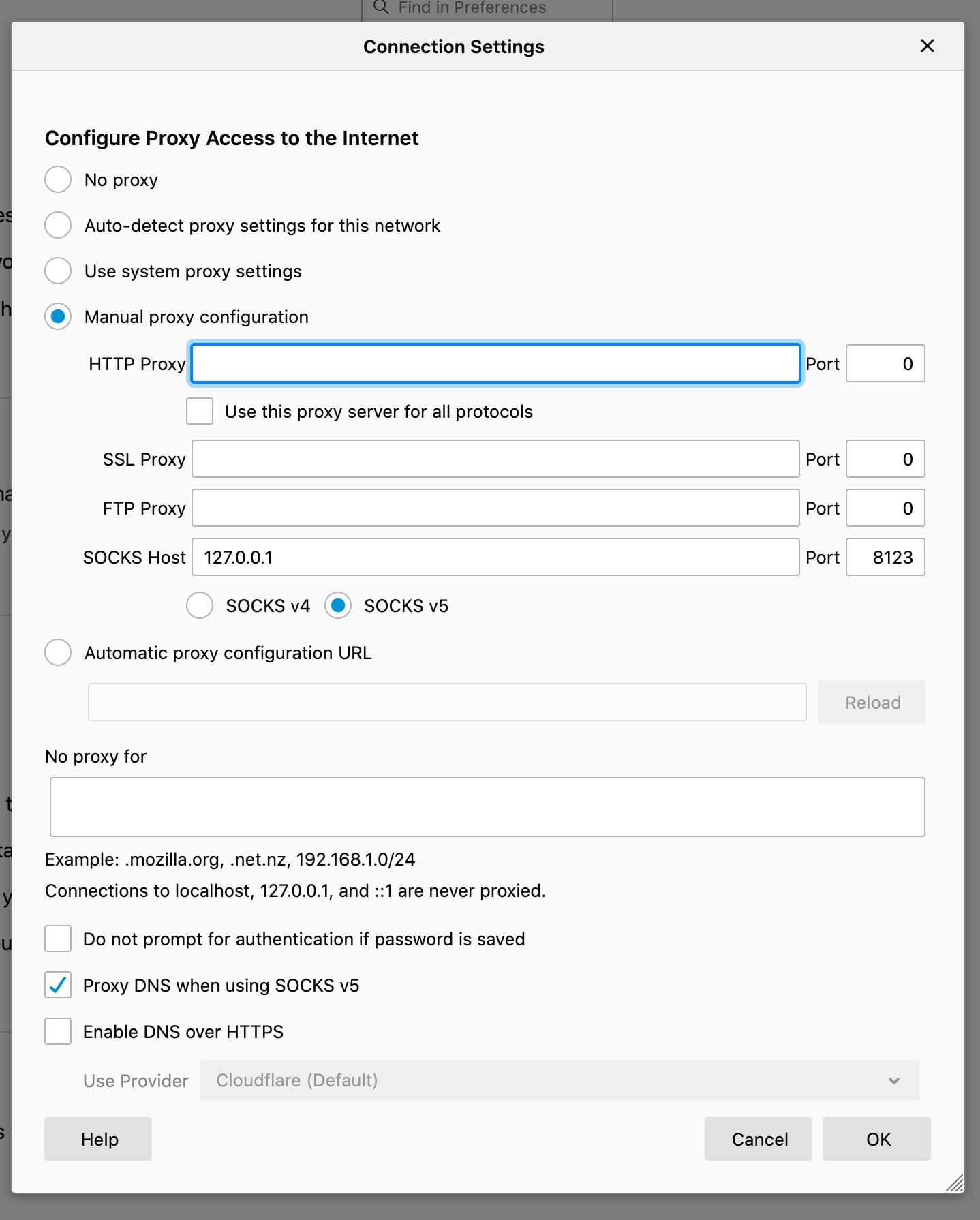 Tip Windows Users. If you are experiencing problems setting up an SSH tunnel using Firefox, try to add the socks proxy to the Internet Options in Control Panel (the old-school way of adding proxies to windows):